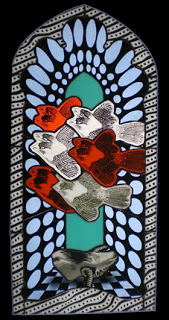 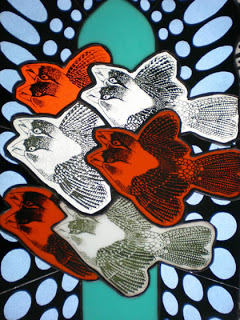 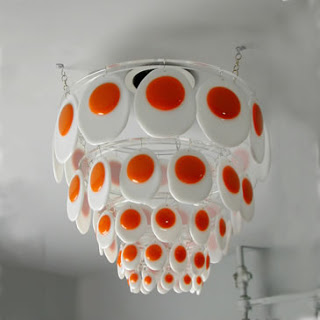 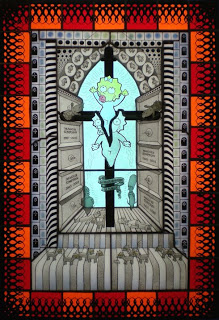 Joseph Cavalieri: “My painted glass imagery includes two and three headed sparrows. I predict by the year 2080,
cloning and DNA engineering will be commonplace. Genetically
modified birds sporting multiple heads have out bred the now-rare single-headed
variety. I don’t judge this world, I’m simply getting YOU ready for it!

I have been working in stained glass as a fine art form since 1997. Painted stained glass
has a history rich in religious storytelling. My aim is to expand this tradition by basing my work on
historic fables and futuristic stories using images from pop culture in savory Renaissance settings.
By overlaping the glass, I make work that pushes the two dimensional flatness. By adding
layer upon layer of glass, I pull the viewer in, I want them to get lost in my world and in my vision.

My challenge is to produce art that excites the viewer and the glass world.
The ideas behind the work supersedes the techniques. Early in 2009, while my frame
maker Robert Shapiro was dropping off work at my studio, “Il Momento Della Morte”
(The Moment of Death) was laid out on my light table. Seeing it he instantaneously shouted
‘You are going straight to Hell’. I couldn’t ask for more emotional reaction to my art.

I have been exhibited in art galleries and museums in the US and Europe. Highlights include
the Museum of Arts and Design in New York, Bullseye “e-merge” exhibitions in Portland, OR, Jonathan Shorr
Gallery and the Leslie/Lohman Gallery in Manhattan., as well as The Society of Arts and Crafts, in Boston

In 2008 I was commissioned by the MTA in New York for a “Arts in Transit” permanent glass installation,
and have been twice published in Corning Museum’s New Glass Review. Also in 2008
I won the Glass Arts Society’s “Emerging Artist Lecture Award” and was chosen for a two month
residency at North Lands Creative Glass in Scotland. In 2009 I was awarded an eight week scholarship at
Penland School of Crafts, and in March 2010 I will be a Research Residency as Visiting Scholar in
the glass studio at Sydney College of the Arts.

I come from graphic design background, art directing at magazines such as GQ and
People. At the same time, I studied with Kazumi Ikemoto, Klaus Moje,
Erica Rosenfield, Toby Upton and Judith Schaechter at Urban Glass in Broolyn,
where I currently teach stained glass.” 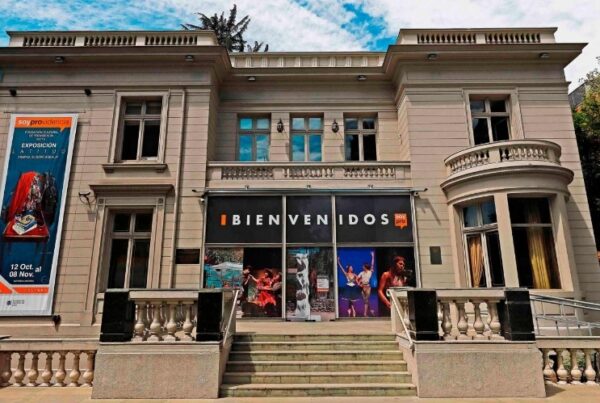 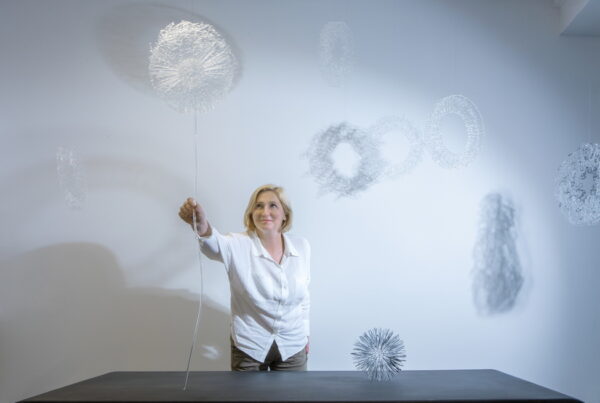 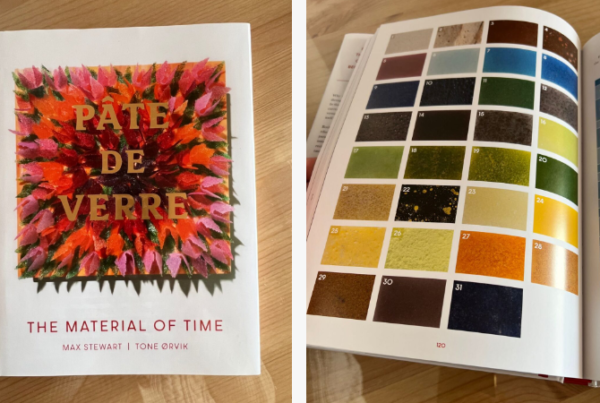 This website uses cookies to improve your experience while you navigate through the website. Out of these, the cookies that are categorized as necessary are stored on your browser as they are essential for the working of basic functionalities of the website. We also use third-party cookies that help us analyze and understand how you use this website. These cookies will be stored in your browser only with your consent. You also have the option to opt-out of these cookies. But opting out of some of these cookies may affect your browsing experience.
Necessary Siempre activado
Necessary cookies are absolutely essential for the website to function properly. These cookies ensure basic functionalities and security features of the website, anonymously.
Functional
Functional cookies help to perform certain functionalities like sharing the content of the website on social media platforms, collect feedbacks, and other third-party features.
Performance
Performance cookies are used to understand and analyze the key performance indexes of the website which helps in delivering a better user experience for the visitors.
Analytics
Analytical cookies are used to understand how visitors interact with the website. These cookies help provide information on metrics the number of visitors, bounce rate, traffic source, etc.
Advertisement
Advertisement cookies are used to provide visitors with relevant ads and marketing campaigns. These cookies track visitors across websites and collect information to provide customized ads.
Others
Other uncategorized cookies are those that are being analyzed and have not been classified into a category as yet.
GUARDAR Y ACEPTAR